Registration & Networking:
Starts at 11:30 AM 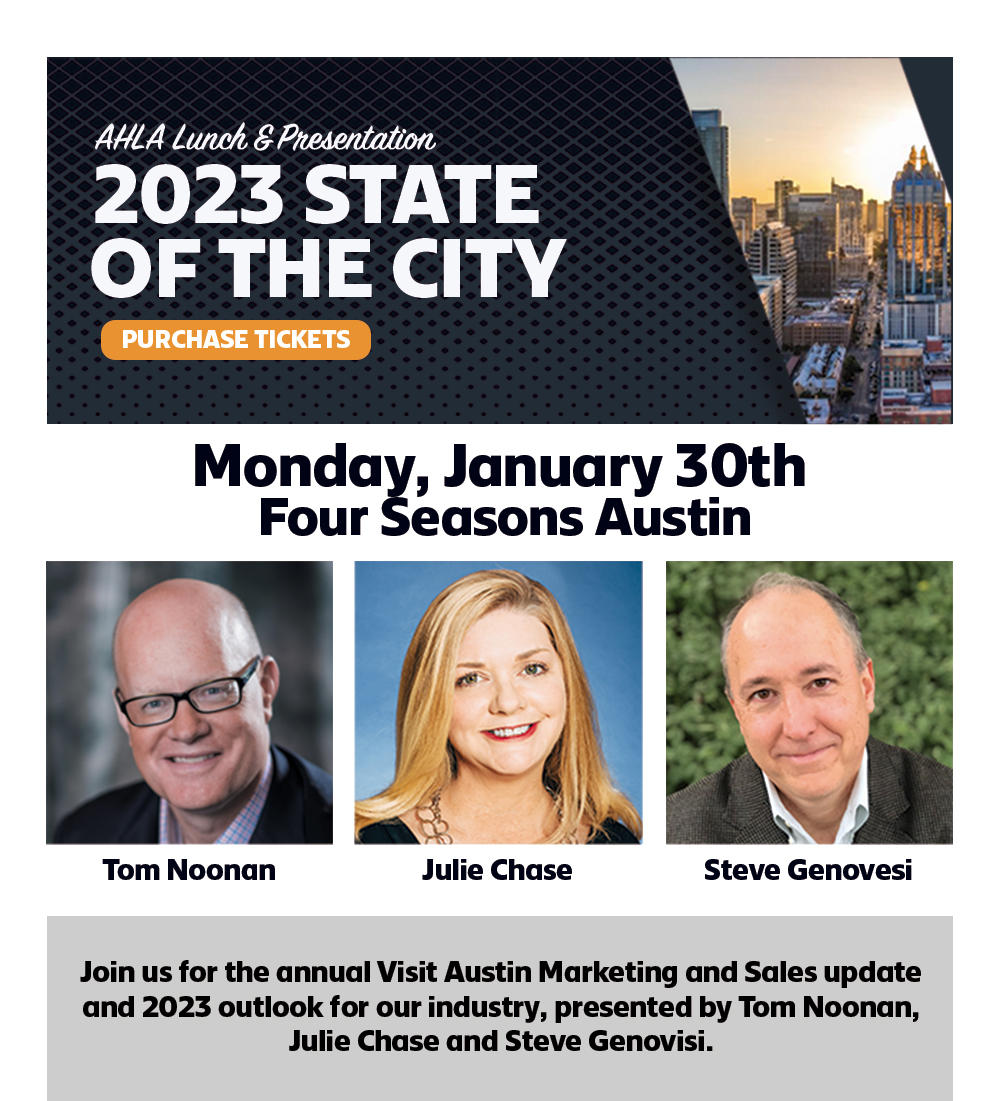 Tom Noonan joined Visit Austin in 2016 as President and CEO. Under Noonan’s leadership, Austin has seen year over year increases in total number of visitors, visitor spend and record convention bookings. In 2019, he oversaw the launch of the Visit Austin Foundation with a mission to develop and promote education, job training and career opportunities within the hospitality, music and tourism community in the greater Austin area. Tom has been committed to building, attracting and maintaining a diverse team and over the years has transformed the organization’s robust Board of Directors, which includes the addition of several influential community leaders from the hospitality industry, private sector and the City of Austin. During the pandemic, Tom worked closely with the hospitality community, the Austin Convention Center and City Staff to help lead the recovery of the local tourism industry.

Looking ahead, Tom will continue to work with the Mayor and City Council to implement the Tourism Public Improvement District and support efforts to move forward with the Austin Convention Center expansion. Currently, Tom serves on several industry boards, including U.S. Travel Association, Destinations International and the Executive Committee of Texas Travel Alliance.

Tom is a graduate of Luther College. With over 30 years of experience in the tourism industry, he spent 18 years at the Dallas Convention & Visitors Bureau where he started in Sales and Services and left as a Convention Marketing Executive when he accepted the role of CEO at Visit Baltimore in 2007. Tom, along with his wife, Mindy and son, Reed, enjoy exploring Austin’s unique food scene, outdoor offerings and supporting the local community, events and businesses.

Julie Chase is the Senior Vice President and Chief Marketing Officer for Visit Austin, where she joined in 2012 after serving as Tourism Director for the State of Texas since 2003.

Prior to joining the state, she served as a Public Relations Representative for the Superconducting Super Collider Laboratory in Dallas, Texas.   Julie is a graduate of Texas Tech University.

Steve Genovesi has 34 years of sales & marketing experience in the convention and tourism industry. As Executive Vice President, he has overall responsibilities for the convention, sports and conventions service departments. Steve has been with Visit Austin for almost 8 years.

Prior to coming to Austin, Steve was VP of Sales and Marketing for the Chattanooga, Tennessee Convention and Visitors Bureau for 8 years nd Marriott Hotels for 18 years – which included Director of Sales and Marketing for the San Antonio Marriotts, Director of Sales at the Atlanta Marriott Marquis during the Summer Olympic Games and the Opening General Manager for the largest urban Residence Inn in downtown Philadelphia.